The Big Fortfied Tasting launched in 2010 and it’s the only wine tasting of its size that is solely dedicated to fortified wines. It’s not just big; it’s actually the biggest.

What’s a fortified wine? A fortified wine is a wine which has had a spirit added to it. Think Port, Muscat, Sherry and Madeira. They started adding a spirit to Port (which was once a dry red wine) in the 17th century to help it travel better during shipping – and then they realised it tasted so yummy, so they kept on doing it.

The Big Fortified Tasting 2019 is held in a beautiful domed room in Church House in Westminster and welcomes fifty-four world-renowned fortified wine producers. I pop in for a quick whistle stop tour and make it my mission to try three different styles of fortified wines before the morning is through and I have to bid my farewells.

The first producer I happen upon is Bodegas Cruz Conde and I don’t think I could have chosen better for my first fortified wine of the day (I know that sentence sounds dodgy but I’m owning it). Bodegas Cruz Conde has been operating since 1902 and has grown to become one of the most important wineries in the Montilla-Moriles region. I am told that the bodega is amazing to visit because it is the epitome of a traditional, rustic winery and the old winemaking equipment is still in use today.

These are Montilla wines from Montilla-Moriles, not sherries from Jerez and there is a big difference in the expression of the grapes. Montilla wines are earthier and nuttier than their sherry cousins and after I taste the Fino, I’m pulling up a chair.

Not strictly a fortified wine, the Fino is produced from a controlled fermentation of musts, which is then biologically aged under a layer of yeast (flor), then aged for 5 years in American oak barrels. The result is a natural wine that tastes dry with a high acidity and a predominant palate of nuts and fruits. Very tasty and refreshing – a perfect start to the day!

We follow this with the Oloroso, which is noticeably darker in colour and sweeter in taste. There are more dried fruits, along with some earthy notes like mushrooms, but because of the high acidity, it still tastes fresh and would work as an aperitif or a digestif and would be great with sweet and sour dishes.

The Solera Cream is softer; it’s a blend between Oloroso and Pedro Ximenez and what it loses in acidity, it makes up for in sweetness. We’re getting more into dessert wine territory now, although it would be great with cheese or orange-based appetisers.

Next – the PX! Every winery has their own way of doing Pedro Ximenez and that’s why it’s such an exciting wine to get into. Theirs is complex and is bursting with raisins, ripe figs and toffee. It’s gorgeous. We get even more serious with their signature PX – Pedro Ximenez Solera Fundación – which has been aged for 15 years. It’s remarkably fresh with a high acidity, but with all the caramel, toffee, spices, oak, tobacco and coffee that makes it so interesting and scrumptious. On its own at the end of a meal is just ideal, but poured over a good vanilla ice cream is pure indulgence. It’s also lovely with dark chocolate, which tends to take a little sweetness away from it.

My next stop is at Sandeman for some Tawny Port. Although Sandeman has a history that stretches back to 1790 and is the world’s most awarded Port house by the most significant international competitions, it’s the bright labels that catch my eye. With a yellow background, chunky block text and a sinister shadowy-looking figure in the background, the 10 Year Old Tawny looks more like a craft beer bottle. The rep confirms that they have recently rebranded to gear themselves towards a younger audience – and I think it will work because Port is definitely there on the bar scene and, like sherry, it’s on the brink of hipster cool. But what does it taste like?

I start with the 10 Year Old Tawny, which is fruit-forward and nutty. It would be nice chilled as an aperitif – I can see myself sipping on this at the beginning of an evening. The 20 Year Old is more warming – the tingly alcohol sensation is more evident – and there’s dried apricots and vanilla on the palate.

Moving onto the 30 Year Old Tawny Port and we’re getting more viscosity. It’s smooth, it’s nutty and the caramel, toffee and coffee notes are really coming through. I hear it’s great with some funky cheese at the end of a meal.

And then the 40 Year Old – wow, the freshness is impressive. It’s a real testament to the quality of the grapes and it really is delicious. As well as the toffee and caramel, there’s much more spice coming through.

I just have time to taste my third kind of fortified wine of the day: Madeira. I’ve been to Madeira and really enjoyed visiting a winery there and learning a little about this style of wine. It’s one of the longest living wines in the world and it stays fresh for years, even after opening the bottle. Justino’s Madeira Wines was established in 1870 and is one of the oldest producers and exporters of Madeira wine.

For a truncated tour of Justino’s wines, I start with a 5 Years Old Reserve, moving onto a 10 Years Old and finishing up with a rather special bottle from 1978. Yep.

Justino’s Reserve 5 Years Old Fine Rich is young and fresh. It could be enjoyed as an aperitif, perhaps slightly chilled, with or without food. With five more years of ageing, it is drier and fruitier. Now how about forty years of ageing?

The Boal 1978 is something else. After all that time in the bottle, it still has a fresh acidity and an alluring herbaceousness – mint and green pepper. It has spice and vanilla, coffee and caramel. Age has also given it a minerality which keeps it grounded, making you go back and savour another sip. 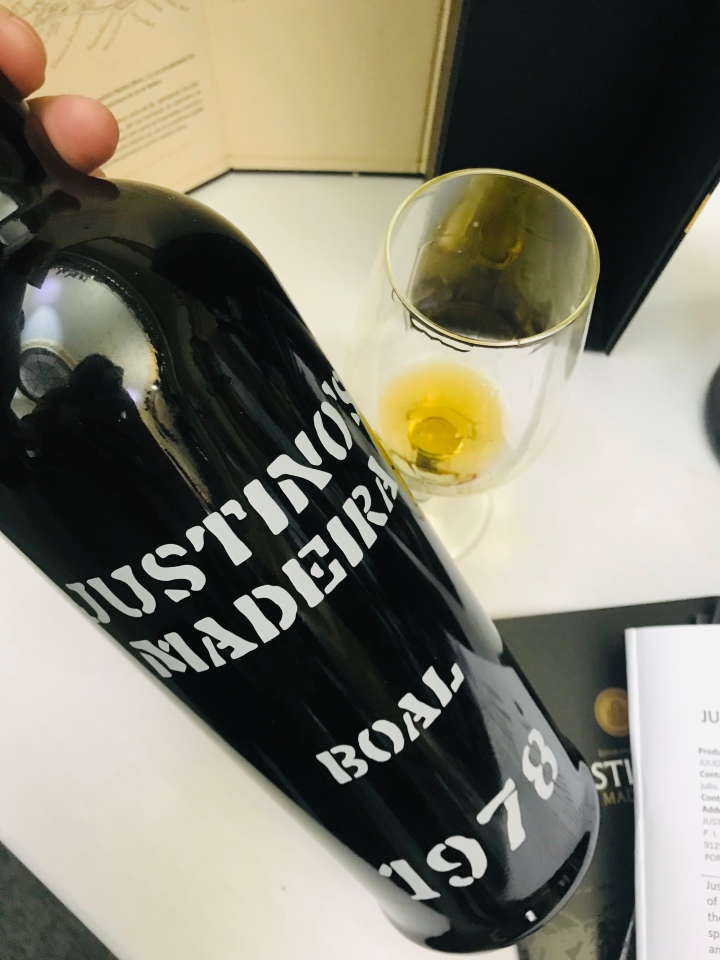 There’s so much to discover in the world of fortified wine and the B.F.T. has got to be the best place to start for novices like me. Don’t be surprised if you’re out to dinner with me and I enquire about a Pedro Ximemez to finish. With ice cream.

The Blanc des Millénaires 2004 from @charlesheidsieckchampagne - just one of the many highlights from the @liberty_wines portfolio tasting last week. Read about more in my latest blog post - link in bio ⬆️⬆️⬆️ - - - - - - - - - #skinandpulp #wine #vino #vinho #wineoclock #justwine #libertywines #ilovewine #wein #wino #discoverunder10k #instawine #winetime #winegeek #winelife #lwtasting #winetastings #timetowine #womeninwine #wining #wines #charlesheidsieck #womenwholovewine #wineevents #winehost #winetasting #libertywinesportfoliotasting #londonwine #blancdesmillenaires2004 #blancdesmillenaires
A glass of Antico from @ipastini, made from local, traditional Pugliese grapes - Verdeca, Bianco d’Alessano and a little Minotolo. The name refers to the old ways of winemaking and this wine is crafted using traditional methods of the winegrowers of the past, such as gobelet training and then blending according to the amounts already established at the time of planting. It’s pale in colour, with a light to medium body but a full, fruity taste on the palate – citrus and green fruits. One of those lovely seafood whites that can also be guzzled (or sipped - whatever your style!) as an aperitif. Perfect with salad and anchovies 😋 * * * * * * * #skinandpulp #organicwine #winery #wine #vino #vinho #italianwinery #justwine #lovewine #ilovewine #wein #wino #ipastini #instawine #itsfiveoclocksomewhere #winegeek #winelife #Verdeca #Minotolo #winetime #iwine #italianwine #pugliese #BiancodAlessano #antico #vineyard #oldways #traditionalwinemaking #italy #puglia
That time I was standing a boat in the Maldives watching some Santas being photographed for a Christmas marketing campaign. Didn’t wake up thinking that was going to happen! #WineWithAViewNumber4 * * * * * * * #skinandpulp #wine #vino #vinho #wineoclock #justwine #maldives #ilovewine #wein #wino #discoverunder10k #instawine #winetime #winegeek #winelife #imonaboat #timetowine #womeninwine #wining #wines #wininganddining #womenwholovewine #boatlife #winehost #winetasting #themaldives #sunset #purplesunset #champagnelife
Is it time for rosé yet? Answer: ALWAYS. * * * * * * * #skinandpulp #rosé #vino #vinho #provence #justwine #lovewine #ilovewine #wein #wino #roséallday #instawine #itsfiveoclocksomewhere #winegeek #winelife #provencerose #sttropez #winetime #iwine #sainttropez #wines #wineporn #rosewine #wineblogger #roses #winedown #drinkup #winenot #drinkpink #thinkpink
There are SO many good places in Miami to drink good wine. When I first went in 2017, I was expecting Will Smith vibes - sun, fun, bouncing cars, muscles, bikinis - I didn’t exactly think I was heading to a gastronomic paradise. But I was wrong! That first trip, I went to Hakkasan, Juvia, Nautilus, Yardbird, Quinto La Huella and Sugar at the East Hotel, Plant Food + Wine, Nikki Beach, not to mention on a food tour around Little Havana. Last year, I revisited a couple of those places, but found amazing new ones as well, like Novikov Miami and Quality Meats (which sounds ridiculous but it was really one of the best steak dinners I’ve ever had, with unlimited wine... I KNOW). I don’t actually know what this place is in the photo, but I found it in South Beach and was blown away by the colour! I’m sure the food there is delicious too. * * * * * * * #skinandpulp #wine #vino #vinho #wineoclock #justwine #lovewine #ilovewine #wein #wino #discoverunder10k #instawine #southbeachmiami #winegeek #winelife #sobe #wineusa #winetime #womeninwine #miamirestaurants #wines #miamiwine #womenwholovewine #winetravel #wset3 #winedown #winetravel #winenot #universalfoodie #miami
So you don’t like Chardonnay, huh? Why, I oughtta...! The subject of Chardonnay can provoke some very strong emotions in me. Working in a wine bar, you do hear a lot of things along the lines of, ‘Anything but Chardonnay.’ Which, by the way, is something people used to say in the 1980s and is just soooo not cool to say anymore. Let’s get something straight: Yes, there was a lot of bad mass-produced Chardonnay around in the 80s and 90s mostly coming out of the New World (ahem, coughstralia) that tasted too much of astringent oak. But that was thirty, no, FORTY YEARS ago now and things have moved on. The New World, PARTICULARLY Australia, produces some STUNNING Chardonnay these days (look at regions like Adelaide Hills, Yarra Valley and Mornington Peninsula), and let’s not forget, the FINEST white wines in the world come out of Burgundy and are made from CHARDONNAY. ‘But I don’t like the creaminess/texture/oakiness...’ HAVE YOU HEARD OF CHABLIS? ‘But that’s not...’ YES, YES, IT IS. Clean, pure, steely, citrusy, no oak in sight, fresher than the morning dew on a bright spring day... you like Chablis, right? And there’s more in that style that isn’t Chablis - we pour a delish Cotes du Gascogne Chardonnay at work, which is fruity, fresh and just lovely. Sorry, I don’t like to raise my voice but, as John Lennon once said, Give Chards a chance. (*The Chardonnay in this picture was enjoyed at @yardbirdsouthern in Miami and it was fanfrickintastic.) * * * * * * * #skinandpulp #wine #vino #vinho #wineoclock #justwine #lovewine #ilovewine #wein #wino #discoverunder10k #instawine #chardonnay #winegeek #winelife #chablis #whiteburgundy #winetime #womeninwine #rant #wines #winerant #womenwholovewine #winetravel #wset3 #winedown #yardbird #winenot #yardbirdmiami #miami